The light bulb is often used as a symbol of inspiration, perhaps because of so many ideas that went into creating the light bulb and its impact on modern life.

The light bulb wasn’t so much invented as much as improved over time by various people and organizations. Thomas Edison wasn’t the first to work on electric light but he was the first to commercialize it starting in 1879. Edison went on to make several improvements in the following years.

Thomas Edison did invent what became the standard socket for light bulbs in North America. This innovation permitted easy replacement of bulbs (Principle 1 – Segmentation). The ground is provided by the threaded sleeve of the socket and the hot connection is made by the metal tip of the bulb base at the bottom of the socket. This keeps the hot circuit as far away from human hands as possible (Principle 1 – Segmentation).

Early light bulbs relied on vacuum to keep the filament from burning in the presence of oxygen. Later bulbs were filled with argon gas which not only met the same goal but also made the bulb more efficient by slowing the evaporation of the filament material. This allows the bulb to be operated at higher temperatures without reducing its service life (Principle 39 – Inert Atmosphere). 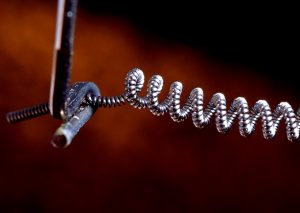 In today’s light bulbs, a tungsten filament is used to produce light. When electricity is put through the filament, its electrical resistance causes heat which in turn causes the filament to glow.

The filament is first coiled and then coiled again into a nested coil (Principle 7 – Nested Doll). This allows manufacturers to put a maximum amount of filament into a small package, providing more light (Principle 17- Another Dimension).

Incandescent light bulbs have one serious limitation and that is poor efficiency, making light with only 5% of the electrical energy it uses, and the rest wasted as heat.

Researchers at MIT and Purdue University are exploring an innovative method of using a nanophotonic coating (Principle 30 – Flexible Membranes/Thin Films) to reflect radiated energy back at the filament. This light, outside the visible spectrum, is thus used to reheat the filament and produce more visible light.

Photo from Universal Pictures Despicable Me

Comparing Apollo To The Shuttle – Which Was Really The Moonshot?
March 17, 2019
Go to Top