As I described in the first post in this series, some elementary students in Ontario were recently suspended for incomplete immunization records. I wrote this series of posts in an effort to come up with ideas using each of the 40 Principles.
Principles 1-10, Part 1
Principles 11-20, Part 2
Principles 21-30, Part 3
Principles 31-40, Part 4
I challenged myself to produce at least one idea with each Principle. There were some Principles that failed to inspire any ideas in me. More on that later. I will summarize my favourite ideas below.

The first proposal was to break up the immunization record into milestones. A child doesn’t need to present every previous test and assignment score to advance to another grade – the only record required is that the child passed the previous grade. By the same token, can immunization milestones be set which make record keeping less onerous? Once each milestone is met, the previous records are no longer necessary.

At the end of each immunization, medical practitioners could email parents a confirmation of the shot with an unique embedded code. With appropriate permissions given, the medical office could also email the child’s school. 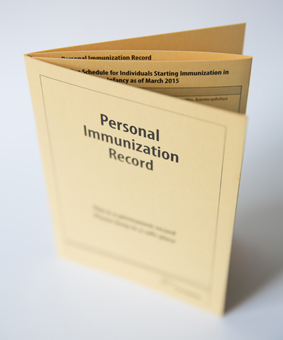 The yellow immunization record is just a series of rows upon which immunizations are written in sequential order along with the date. This makes reviewing it difficult, especially since the rows are very cramped and doctor’s handwriting is not renowned for legibility, and for laymen reviewing the card the immunization names are hard to decipher anyway.

What if the card was broken into pre-printed rows for each immunization and the doctor only had to date and sign in the right square? And each row could include the correct age for the shot. This would give a sense of progress to the card making it easier to interpret – like trying to earn a free sub!

Similar to the previous idea, filling in the yellow card could be made less ambiguous if doctors issued stickers that parents could place on the record.

The stickers could be colour coded to make it possible to determine if the child is up to date at a glance. For example a row ending in a yellow sticker needs a booster.  A row ending in a green sticker is good for life.

If doctors are not set up to email parents, in the alternative they could give parents a unique receipt that would be included in the vaccine packaging. Parents could scan the receipt when they get home and not only use this info to record the shot but also pull up info on what care the child will need for side effects etc.

As an IT professional I will admit a bias for this idea. It seems appalling that this isn’t the solution already. And in fact there are efforts under way in Ontario and nationally to do exactly this.

As a taxpayer, however, given the debacles that have happened with government efforts to maintain records (the long gun registry, eHealth) I can understand why politicians are reluctant to push for the resources to do this well.  The glimmer of hope is that immunization records are a relatively straightforward endeavour.

Another possibility is that we store immunization records online, but not centrally but rather on a distributed blockchain.

Doctor as steward of yellow card

Speaking as a parent, the perils of maintaining the yellow card are that I might forget to bring it, and if I bring it I may lose it. Instead, the doctor could keep custody of it and just make a photocopy every visit.

Observations on the use of the 40 Principles

My first observation of the 40 Principles is that there are forty of them! It’s a long slog to go through alone.

I also found brainstorming alone to be problematic. Some of my more ludicrous ideas could have been fodder for somebody else’s idea, but instead they just sat there embarrassing me.

The conclusion, though, is a positive one. I think there are enough good ideas on this page to count as a worthwhile day’s work. What do you think?

Comparing Apollo To The Shuttle – Which Was Really The Moonshot?
March 17, 2019
Go to Top