Nevertheless, the two process definitions are very similar. Both d.school and IDEO were founded by David Kelley and many individuals have worked for both organizations, bring ideas back and forth.

I speculate that much of the motivation behind different terminology between these two approaches and many others – including IBM – that claim to explain Design Thinking is to stake a claim on a unique approach and avoid potential intellectual property complaints. In addition, the different approaches reflect the priorities of their practitioners.

IBM makes a clear case for its own view of Design Thinking. Whereas a design firm can be expected to absorb the principles of design through the formal education of its members, IBM is largely populated with technologists of various description, who had never been exposed to Design Thinking or its benefits.

In 2012, IBM had just one designer for every 80 coders. By the end of 2016, it had shrunk that ratio to 1:20, spending $100 million to make the change from an engineering first culture to one that placed a higher priority on users’ outcomes.

To shift the culture of such a large company, IBM developed its own design thinking guidelines. The IDEO and d.school approaches were conceived to be iterative, but in practice IBM teams were interpreting them too linearly, too much like the “over-the-wall” approaches the company hoped to avoid. This was a particular challenge when the teams were large and often made up of individuals in different locations.

“Generic design thinking doesn’t really tell you how to manage that situation … what happens is you very easily go off the rails because of the complexity of the environment.”

IBM simplified the practice of Design Thinking and illustrated it with an infinity symbol. 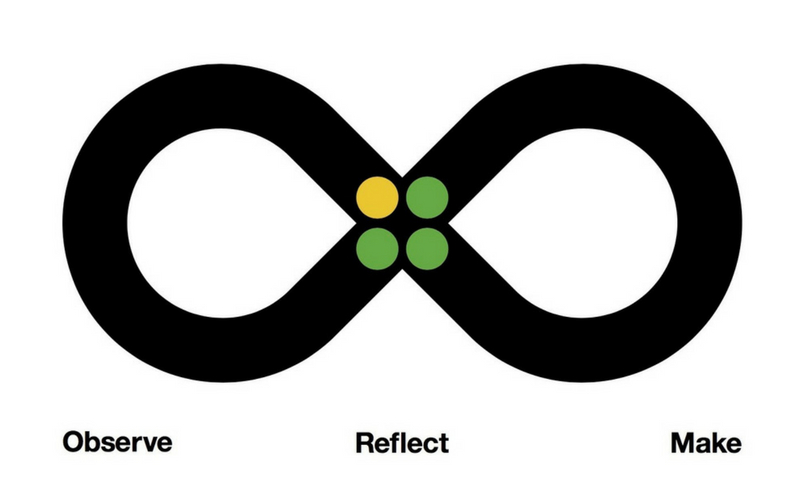 The yellow dot represents the user, while the green dots represent the steps Observe, Reflect and Make.  The loop connotes the fact that these steps are taken iteratively, over and over, involving the user.

Design Thinking is a deep subject. Whether the d.school or IDEO steps are taken, or IBM’s simplified Observe, Reflect, Make steps, underlying these steps are countless tools and techniques that improve outcomes.

What is striking about the IBM approach is that it doubles down on the centrality of user feedback and iteration in a simple loop metaphor. When attempting to sway an organization as large as IBM with 380,000 employees, simplicity is vital.

Getting 380,000 people to agree on the merits of a new concept is challenging. Making sure they know what to do to adhere to the concept, and are able to remind each other what to do, is even more so.

Your kid may agree that oral hygiene is a fine goal, but when asked, “Did you attend to your oral hygiene today?” the answer may be an uncertain nod. Less equivocal is the question, “Did you brush your teeth today?”

With its simpler framework for Design Thinking, IBM is asking its staff an unequivocal question, “Are you following the Loop on this project?”

Why Does Design Thinking Worship The User?
February 10, 2020